Sequential has just released a new OS for the Prophet-6 and the OB-6 that adds much-anticipated features:

The new features significantly enhance the expressivity of both instruments. San Francisco, CA—Jan 12, 2021—Fast on the heels of the reintroduction of its legendary Prophet-5 synthesizer, Sequential today announced that it has created a desktop version of the acclaimed instrument. As with the keyboard version, the desktop model will be available in both five- and ten-voice configurations, dubbed the Prophet-5 desktop module and Prophet-10 desktop module, respectively. They feature the same authentic vintage sound and front-panel controls as the Prophet-5 and Prophet-10 keyboards, but in a smaller form factor designed for portability and space-conscious studios.

“Our introduction of the Prophet-5 and Prophet-10 Rev 4 keyboards has been hugely successful. At the same time, a lot of people have been asking us for an easy way to fit them into a smaller studio space or into a touring rig,” commented Sequential founder and original Prophet-5 designer Dave Smith. “It was an easy decision to create a desktop module to fill that need. The great thing is, we managed to fit the same big, ballsy sound of the full Prophet-5 into a desktop model. It sounds every bit as awesome.”

Like the original, the new Prophet-5 and Prophet-10 modules feature two multi-waveform analog oscillators, analog resonant low-pass filters and amplifiers, and a filter and amplifier envelope per voice. Modulation is provided by a multi-waveshape LFO and Poly Mod, a ground-breaking modulation scheme for its time that allowed the filter envelope and oscillator B to be routed to a variety of destinations including filter cutoff frequency, oscillator A frequency, and oscillator A pulse width.

And just like the new Prophet-5/10 Rev 4 keyboards, the modules feature genuine Curtis VCOs and filters as used in the Prophet-5 Rev 3, as well as the Dave Rossum-designed SSI 2140 filter — the modern counterpart of the original SSM 2040 Rossum designed in the Prophet-5 Rev 1 and Rev 2. A Rev switch on the front panel allows users to switch between the two as desired.

Also present is the new Vintage knob, which loosens up the oscillators, filters, and envelopes from voice to voice as they typically are in vintage Prophet-5s. Users can dial in progressively more vintage character from a very stable “4,” as in Prophet-5 Rev4, all the way to “1,” as in Prophet-5 Rev1, which was the most temperamental of all Prophet-5s. The original factory sound set is included as well.

Other modern enhancements include velocity sensitivity and aftertouch to increase expressiveness, as well as MIDI and USB connectivity. Control voltage and gate ins/outs are also present for connecting modular synths and other gear. The new modules are housed in a premium-quality, steel case with hand-oiled sustainable black walnut heartwood trim.

Both modules will be available in February. Based on the famed 2500 modular synth originally released in the 1970s, the ARP 2600 semi-modular synthesizer became an instant hit when it launched and was quickly adopted by well-known artists. The Behringer 2600 replicates that fabled synthesizer with circuitry inspired by the 70s with matched transistors and JFETs. Owning a 2600 is like having your own piece of history, enabling you to re-create timeless classics or forge your own musical path.

Originally released in 1981, the MonoPoly synthesizer was highly revered by artists from that era, and is still to this day. The Behringer MonoPoly is now ready to for the 21st century – an ultra-affordable and even more feature-packed homage to the original. Conjure up virtually any sound imaginable with incredible finesse and ease. Claravox Centennial is an elite performance theremin that integrates decades of expertise from Moog, the world’s leading theremin makers, to produce a once-in-a-lifetime instrument.

Named after the original theremin virtuosa, Clara Rockmore, Claravox Centennial features the highest quality control and sound available in a theremin for deep artistic exploration. Offering both traditional 100% analog theremin operation and expanded modern performance, as well as an onboard analog delay, preset storage, and more, Claravox Centennial is an extraordinary instrument for creative expression.

Claravox Centennial is designed in celebration of the 100 year anniversary of the first demonstration of the theremin by Leon Theremin, and is only available for a limited time.

Shipping is expected to arrive in January 2021 so get your orders in now to avoid disappointment. Sequential Reintroduces the Prophet®-5, the Synth that Revolutionized an Industry

San Francisco, CA—Oct 1, 2020—After months of clandestine development, Sequential today announced the reintroduction of its most famous and beloved instrument: the Prophet-5. Timed to coincide with founder Dave Smith’s 70th year, the instrument revisits a landmark era in American analog synthesizer design and marks an authentic and authoritative return to roots for the legendary pioneer of electronic instruments.

“It’s not often that you get to revisit your past, retrieve some of its magic, and give it new life,” said Dave Smith. “The Prophet-5 was one of the most exciting instruments to appear in an equally exciting time for music and technology. It’s gratifying to rediscover that its sound and aesthetics are just as appealing now as they were then.”

Faithful to the original, the new Prophet-5 features five voices with two multi-waveform analog oscillators, resonant analog low-pass filters and amplifiers, and a filter and amplifier envelope per voice. Modulation is provided by a multi-waveshape LFO and Poly Mod, a ground-breaking modulation scheme for its time that allowed the filter envelope and oscillator B to be routed to a variety of destinations including filter cutoff frequency, oscillator A frequency, and oscillator A pulse width.

Smith continued, “We also researched what made the original P-5 sound the way it did — organic and alive — and found that a lot of that desirable character was due to fluctuations and differences in the response times and frequencies of the individual oscillators, filters, and envelopes from voice to voice. So we also added a Vintage knob that loosens all of them up like they were in the old days. You can dial in progressively more vintage character as you go from a very stable “4,” as in Prophet-5 Rev4, all the way to “1,” as in Prophet-5 Rev1, which was the most temperamental of all Prophet-5s. We’ve even included the original factory sound set for the full vintage experience.”

Other modern enhancements include velocity sensitivity and aftertouch to increase expressiveness, as well as MIDI and USB connectivity. Control voltage and gate ins/outs are also present for connecting modular synths and other gear. The new Prophet-5 is housed in a collector-worthy, premium-quality, steel and hand-oiled sustainable black walnut heartwood body, with a full, five-octave, semi-weighted Fatar keybed.

Sequential is simultaneously offering the Prophet-10, a ten-voice version of the synthesizer with the same sound engine and collector-worthy design. “I originally designed the first Prophet in both five-voice and ten-voice versions. But the five-voice model was the one that achieved mass production. We thought it would be fun and fitting to reintroduce the ten-voice as well, to make the circle complete.” Sequential Circuits’ later product, the dual-manual, bi-timbral Prophet-10, was a different instrument in both concept and execution.

Both models will are available now!

The company’s products are used by an ever-growing roster of well-known musicians and are available from music retailers worldwide. Instruments include the Pro 3 and Pro 3 SE, Prophet X, the Prophet-6, OB-6, and Prophet Rev2. Sequential is based in San Francisco, where its instruments are also assembled. Visit www.sequential.com. Lorren Chiodo is a saxophonist, vocalist and composer from Melbourne Australia, currently residing in the USA. As a performing artist, she presents original contemporary R&B/soul compositions fused with electronic elements and FX, equally dominated by both lead saxophone and vocal performance. As a saxophonist, she is recognized by her characteristic tone quality, and unique melodic improvisational style.

Lorren works closely with Awave, utilizing a vast variety of our high-end products and musical gear to promote both her artistry and our brands. Lorren is an Eventide Audio artist, using the H9 and H9 control in her recordings, production, and live performances, as well as other Eventide products. She also works closely with BAE Audio, Benson Sound Labs, Harrison and Telefunken. You can check out how Lorren uses the H9 in her live performances here:

Additionally, Lorren works as a composer and music editor, and has been involved in a variety of professional film projects out in Los Angeles. Both her and her equipment reach beyond professional standards, as she employs a variety of Awave’s post-production software and hardware, including but not limited to: Native Instruments, Ableton, Benson Sound Labs, Avid, Focal and Waves.

To learn more about Lorren and her work, you can visit www.lorrenchiodo.com Grandmother is a semi-modular analog synthesizer with a built-in arpeggiator, sequencer and spring reverb tank. Start playing immediately with “no patching required” then explore an infinite sonic playground with Grandmother’s endlessly reconfigurable front panel. Grandmother’s circuits, spring reverb, and spirit are inspired by the classic Moog Modular Synthesizers, making this instrument a powerful addition to a Mother-32, DFAM or Eurorack modular system. Moog Matriarch is a patchable 4-note paraphonic analog synthesizer with a built-in Sequencer, Arpeggiator, stereo Ladder Filters, and stereo Analog Delay. Create rich evolving chord patterns immediately with “no patching required”, then tap into an abundance of inspiring textures, new sounds, and an endless supply of happy accidents through Matriarch’s 90 modular patch points. Based on the vintage circuitry of classic Moog synthesizer modules, Matriarch is a catalyst for creative ideas and a medium for multidimensional expression. The 6-voice pure analogue PolyBrute builds on award-winning technology and sound to deliver the polysynth we’ve all been waiting for. PolyBrute has an expansive morphing architecture and a solid, expressive 61-key range that’ll take your sound where no synth has gone before. 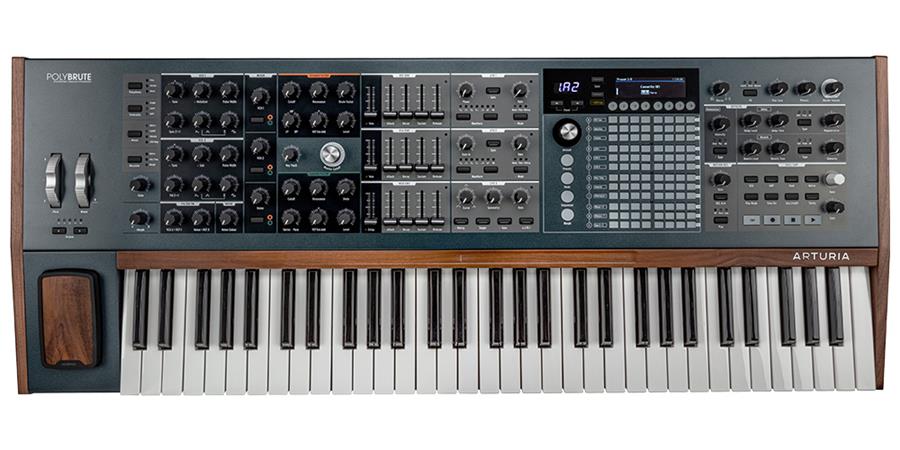 Sequential unveiled The Pro 3, its new flagship monosynth, at NAMM 2020, and it was an easy choice as one of the conference’s standout products. Dave Smith’s latest creation features two VCOs plus a third digital oscillator with 32 permanent factory wavetables. Sequential have now announced that users will be able to upload their own wavetables to complement the factory selection.

“Sequential chose to provide the utility as a web app for easy access and broad support” added Smith. “We wanted to make getting custom waves into the Pro 3 as simple as possible.”

Custom wavetables are generated as SysEx files that can be archived and shared with other Pro 3 owners. To use the feature, users will need to upgrade to version 1.1 of the Pro 3 operating system, available on the support page of Sequential’s website. Both the Wavetable Generator utility and OS upgrade are free for Pro 3 owners.

“How do you make an awesome-sounding hybrid synth even better? By letting users import their own wavetables,” said Dave Smith. “It opens up a lot of new sonic territory for the Pro 3. We hope users get crazy with it.”

Sequential offers two versions of the Pro 3: the standard edition and the Pro 3 SE, which is a special edition that has the same synth in a tilt-up control panel and walnut trim.