The long-awaited full-size ARP ODYSSEY is now available in a limited edition.

The revival of the ARP Odyssey originated from a desire to reconstruct a legendary synthesizer of the 1970s, faithfully reproducing its original analog form while combining respect for history with an update for today’s music production environment; it first took shape as the ARP ODYSSEY, completely analog but in a more compact 86%-sized unit.

KORG’s next move is an even more faithful recreation of the original ARP Odyssey: it’s the full-sized ARP ODYSSEY FS. With a standard keyboard and a body that emanates a sense of solidity, it delivers great playability and a persuasive stage presence. Just like its original version, the instrument is assembled in the United States, faithfully carrying on the quality, sound, and spirit of the original. Choose from three designs: Rev1, Rev2, or Rev3. Only a small number of each is being produced. Don’t miss your chance to obtain a full-sized ARP ODYSSEY – an instrument with decades of soul.

A full-sized ARP ODYSSEY with a standard keyboard

As an alternative to the 86% size ARP ODYSSEY with its compact slim keyboard, we’ve created the ARP ODYSSEY FS, a long-awaited full-size model with a standard keyboard. Featuring a spacious panel layout with faders that are smooth to operate, and a standard-sized keyboard for excellent playability, it’s just what the synthesizer lover or keyboardist has been waiting for. Most of all, its weight and essence are the precise image of the original ARP Odyssey. With analog sound that has already established a firm reputation, it is fair to say that this is a true resurrection of the ARP ODYSSEY. Now you can obtain a full-sized ARP ODYSSEY that’s perfect in every area including sound, stability, appearance, and size, but with the reliability of a brand new synth.

Carefully assembled in the USA to capture the original spirit

The ARP ODYSEY FS is shipped worldwide following its assembly in New York, USA. Skillfully and carefully assembled by a small number of experienced workers, the ARP ODYSSEY FS is then aged, and finally undergoes repeated testing, ensuring the highest level of product quality as befitting this full-sized instrument. The soul of the ARP Odyssey that emerged here forty years ago is now being perfectly resurrected with its analog circuitry and build quality.

A full lineup of all three design generations

“When I look at the front panel of the ARP ODYSSEY FS, it reminds me of all the thinking and decisions that went into the design.

The ARP Odyssey was our first synthesizer without patch cords, so that meant that there had to be a limited number of ways that oscillators, filters, and so forth, could be connected. We tried to pick the connections that we felt would be the most useful. There’s always a trade-off between flexibility and ease-of-use. With patch cords, of course, you could connect anything to anything. But patch cords were too cumbersome to use on stage. So we decided to get rid of them entirely, creating the first ARP aimed entirely at stage use.

The ARP logo with the treble clef sign was designed by my wife, Margaret Shepherd, who went on to become a famous calligrapher and designer (she has written about 20 books on the subject). She also did the lettering on the panel using PressType, long before you could do layouts on a computer.

When I look at the panel, I can almost envision the complete schematic diagram of everything inside. Based on the authentic sound of the KORG unit, it’s clear that very close attention was paid to the engineering that went into the original ARP Odyssey.” 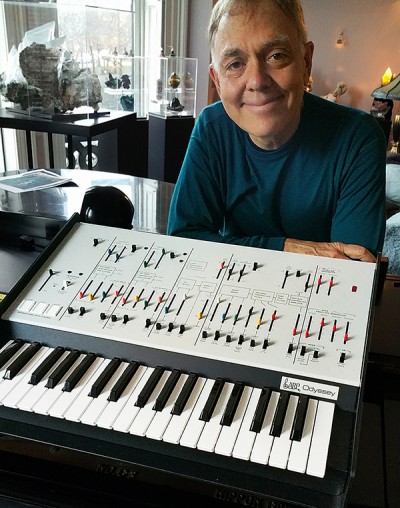 Co-founder of ARP Instruments, Inc. together with the founder Alan Robert Pearlman. In addition to designing the ARP Odyssey, he was involved with the development of numerous products, and subsequently entered management, eventually becoming president of the company. His achievements as an entrepreneur have also been acclaimed, and in 2010 he received the “Entrepreneur of the Year” (Emerging Technology category) award from Ernst & Young. Currently he serves as the President and CEO of Blue Archive, Inc., as well as being a lecturer at MIT’s Sloan School of Management. He is also an emeritus of the New England Conservatory and Berklee College of Music.